“It is a journey to the end of the night and back again into the present, a
moving and poetic recreation of the history of our times, of birth, death
and resurrection.”
Walter Laqueur

Returning is a film about exile and creativity, about memory and
forgetfulness. The photographer and writer Joannan Helander was born in 1948
in a Polish-German-Jewish family in Schlesien (Upper Silesia), the border
lands of southern Poland.

Joanna Helander, while a student at the university in Kraków, was arrested
first in March 1968 and then again in the fall of the same year and
sentenced to prison for having protested against the invasion of
Czechoslovakia. In 1971 she emigrated to Sweden.During the 1970s and 1980s
she made numerous trips to her native country and depicted in pictures and
writings the complex and contradictory life in Poland.

In this film she travels in Poland and Germany, and through the layers of
time, to try to discover what happened to her Jewish relatives who
disappeared during the war. During these travels she keeps up a continuous
imaginary dialogue with her dead father, Gerard K. His voice guides her on
this journey through contemporary Poland and the apocalyptic world of all
those who suffered directly or indirectly in the Holocaust.

The cinematic construction of the film is an elaborate interplay of
pictures, original music, dialogue and poetic narration. The film blends the
dramatic, the lyrical, the grotesque, the absurd and the humorous.

Some voices from the press after the theatrical release in Sweden

A truly convincing testimony of our European reality.”
Dagens Nyheter

The film is made with a lyrical realism which affects one deeply – a clear little poem next to brutally concrete Schindlerian lists.”
Bernt Eklund, Expressen

Poland is a society in a state of breakdown, but at the same time it is appealing and mysterious. Against the impenetrable past, relatives, friends and artists form a protective ring around Joanna Helander. She finds vigorous people everywhere on her continuous journey between Sweden and Poland. Despite the odds, it is a happy return.
Jeanette Gentele, Svenska Dagbladet

A masterpiece. Returning is a profoundly personal depiction of Joanna Helander’s search for her past and that is precisely why it is more universal than the TV-series ‘Holocaust’ or ‘Good-night Mr Wallenberg.’ By blending a mythic-poetic narrative with the strictly documentary, Helander and Persson enable us not only to see a ‘truth,’ but also to be touched and emotionally involved.”
Aftonbladet 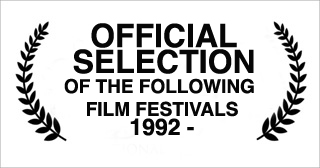