The Institute for the study of Totalitarian regimes in Czech Republic has awarded Joanna Helander the commemorative medal for her “significant role in the fight for the restoration of freedom and democracy during the eras of non-freedom.”

The conferral ceremony will take place on November 14 at the Mayor´s residence in Prague.

The new short film “Ryszard Krynicki x 70” by Joanna Helander & Bo Persson will be screened at the Museum of Contemporary Art, MOCAK, in Kraków on June 26 and at the International Jewish Cultural Centre, Judaica, Meiselsa street 17 in Kraków on June 27.

After the screening Mr Adam Halacinski, Polish Ambassador, will deliver the Freedom and Solidarity medal to Joanna Helander which she was awarded by the Polish president for her contributions in the democratisation of Poland.
The event is co-sponsored by the Nobel Museum together with the Polish Institute and Polish Embassy in Stockholm.

Joanna Helander´s photo of Wislawa Szymborska on the poster for exhibition opening in National Museum in Krakow February 1, 2013 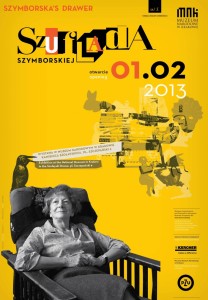 We premiered a completly new version of our short film “Gerard K” at Valand, Göteborg University on November 29, 2012. The short is based on Joanna Helander´s photos and narrated by the actor Keve Hjelm.

President Bronislaw Komorowski has awarded the photographer and filmmaker Joanna Helander the ”Freedom-and-Solidarity Medal” for her contributions to the democratization av Poland.

Joanna Helander was born in southern Poland and studied at the University of Kraków when she was imprisoned  for protesting the invasion of Czechoslovakia. In 1971 she emigrated to Sweden.

In photography books, films and exhibitions she has portrayed the country of her birth. Her books ”Kobieta” 1978, ”Letters from Poland”, 1986 and ”If She from Poland was Here”, 1999 – among others – have been critically acclaimed in Sweden and beyond.

The award-winning film trilogy ”Eighth Day Theatre”, ”Returning” and ”The Twins from Kraków”, which she made together with Bo Persson, has been screened in a number of countries. Their last film is “Waltz with Milosz”.